The recent release of Disney+ and Apple TV+ have brought up the question “What is the best way to consume TV?” It’s a personal preference, but I’ll argue that weekly is the better model for the shows themselves.

When a new season of a show drops on Netflix it is not uncommon for people to watch the entire season over a weekend, or even a single day (if short enough). The joy of binging is the instant gratification and payoff of character arcs and where the story leaves off; but there is also a pressure to finish before you see a spoiler, or discuss the show with friends. 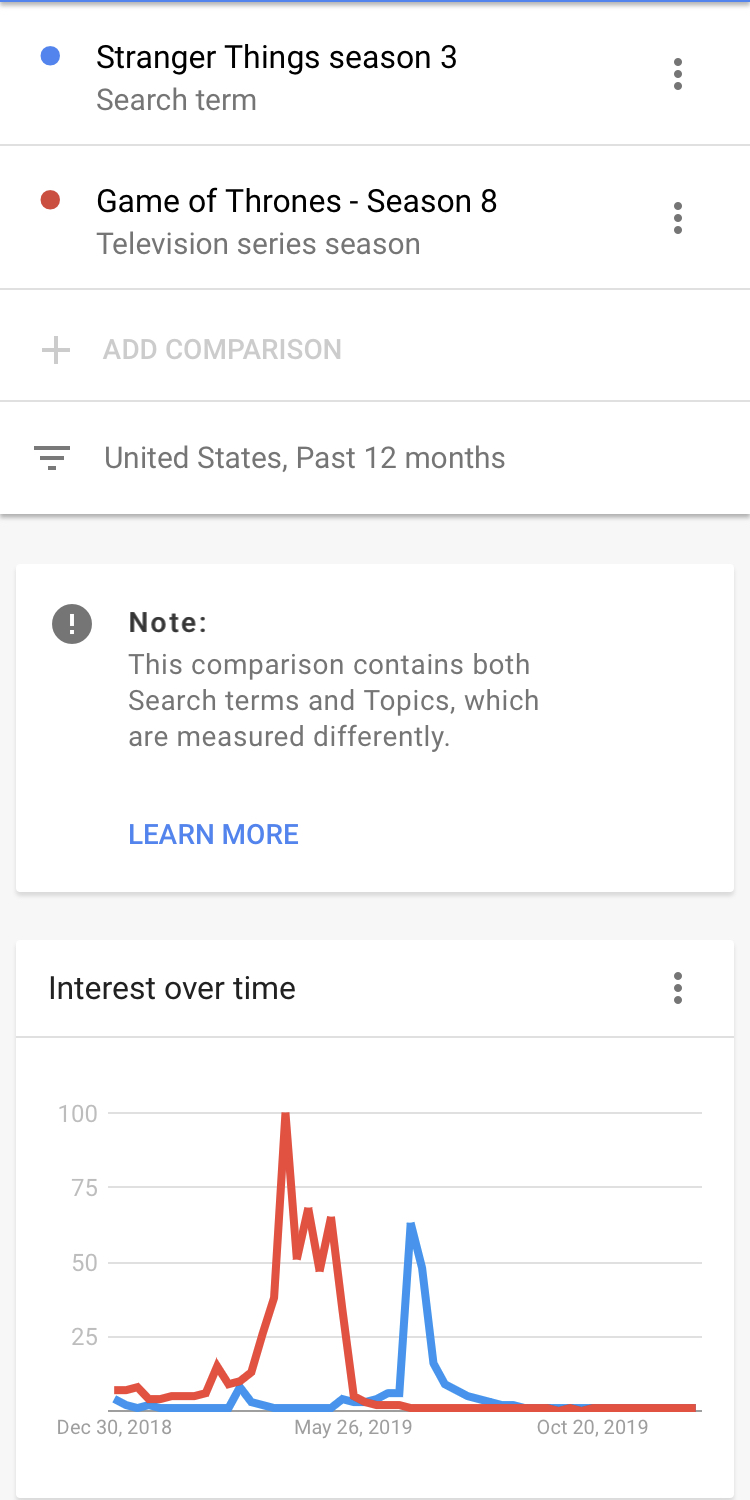 Stranger Things season 3 became Netflix’s most watched season earlier this year, but a week later there was nothing else to say about it. The season was great, the show is popular, but now we’re all waiting for the next season. All of our questions were answers and our worries settled. With shows like Game of Thrones, Watchmen, and Chernobyl, Twitter exploded with reactions week over week. I wasn’t even planning on watching Chernobyl until a month after the premier because people were still going off on how great it was. The screenshot above shows this trend where Game of Thrones was talked about over a period of time, in contrast to Stranger Things which had a sharp spike in popularity.

There doesn’t have to be a single way of launching a show though. Apple is trying something new by releasing the first 3 episodes of their series before going to a weekly model for the rest of the season. I think this is great middle-ground. There are some shows that need an episode or 2 before you really get into them. I was very skeptical of Apple TV+ from the start (because they aren’t really an entertainment company), but after positive word-of-mouth of The Morning Show I gave it a shot. If Apple only launched the first episode I probably wouldn’t have tuned in the week after. It was the end of episode 2 that really hooked me and I’ve seen this same reaction from many others.

Why I prefer weekly releases

And personally, I prefer the weekly model because I feel more engaged with a show. When I binge an entire season I feel like I don’t remember everything that happened no matter how good it is. We’ve also been blessed with thousands of Baby Yoda memes over the past month and a half. I truly believe Baby Yoda wouldn’t be as big of a phenomenon it is today if the entire show was available all at once.