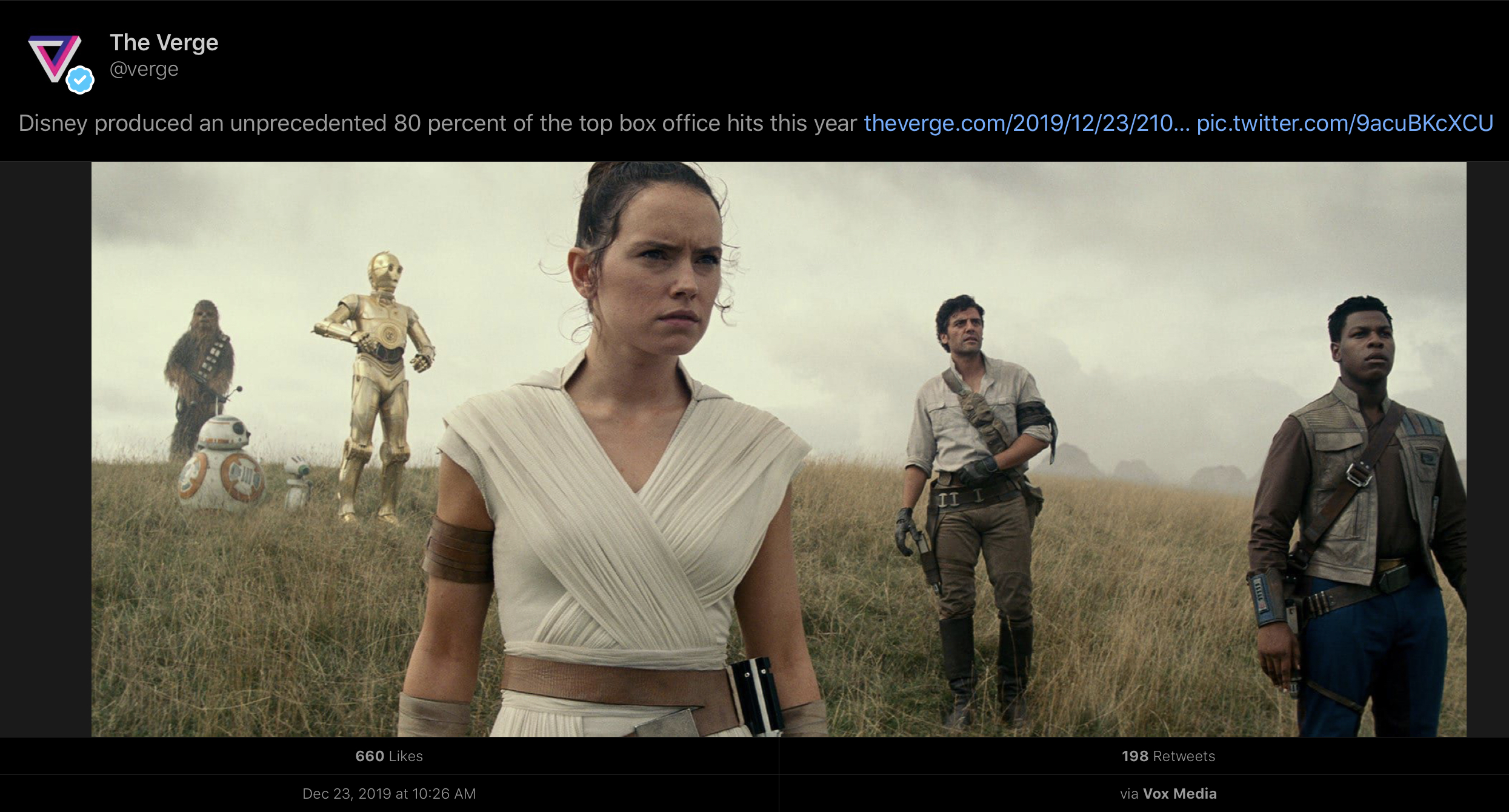 The Verge published an article titled “Disney produced an unprecedented 80 percent of the top box office hits this year” in which many responded “This is not good” and “Disney is a monopoly.” The article and headline are misleading and incorrect.

At a glance you’ll notice that most people responding on Twitter didn’t even read the article and are only responding to the headline. Many read it as “Disney releases 80 percent of film.” That would be worrisome if true, but it’s far from the truth. Disney released 19 films (including Marvel, Pixar, Lucasfilm, and 20th Century Fox) out of 245 wide-released films, which is only 7.8%.

The headline is also misleading by using a percentage instead of integers. “8 out of 10 of the top box office hits” is less scary than “80 percent of the top box office hits”, furthermore, as of December 26 only 6 of the top 10 grossing films are owned by Disney. The article includes Spider-Man: Far From Home because Sony and Marvel Studios have a deal to allow Marvels CCO, Kevin Feige, to have some creative control over their live-action Spider-Man films (Homecoming & Far From Home) in exchange for Spider-Man to be in the MCU. That does not change the fact that both films are Sony’s. Even though Feige has creative control Sony has to sign off those decisions and pay for the films. In other words, Feige cannot do whatever he likes to Sonys IP. The article is also banking on Star Wars: The Rise of Skywalker to join the top 10, but it hasn’t happened yet.

Many are responding to the article calling Disney a monopoly, because “they own everything.” The truth is that Disney could have released the 6 grossing films alone and the Verge article wouldn’t have to change. Releasing movies that aren’t in the top grossing doesn’t help or hurt the films that did do well. Out of hundreds of films released in 2019, is the internet really freaking out over Disney releasing 6 movies? Simply giving these films to other studios to make us feel like there is more diversity of studios is basically asking Disney to curate the top box office for us instead of taking ownership in our viewing habits. The problem shouldn’t be that Disney owns these franchises, the problem is that audiences aren’t going to non-franchise films as much as they do for the 9th film in a franchise. Franchises only continue if there is market demand as well, so the notion that Disney is only releasing crap isn’t true either. Audiences connect to these films and they want more. We consider Disney franchise films as guaranteed success, but if they were guaranteed why were they sold to Disney?

When I see people respond to articles like this so negatively it makes me really upset because I do get out to see original films like Booksmart, Late Night, The Lighthouse, and Knives Out. Most struggle at the box office even though they are incredible. I haven’t seen Uncut Gems yet, but I do have tickets for later in the week. If you were to look at your local theater, and if Uncut Gems is playing, I can probably guess correctly that it’s close to empty, compared to Star Wars which will have 15+ showtimes in a day and are all half full or more. I don’t believe that more showtimes will change the viewing habits of audiences. People are going to the theater to see Star Wars specifically, not because it’s playing every 15 minutes compared to the smaller film with a 7 pm showing. Consumers are actively deciding to see Disney films. Theaters are giving Disney films more times to accommodate demand, and now audiences are blaming Disney for it.

If you were one of the people upset by the Verge article and would like to make a difference, instead of seeing Star Wars 4 times in theaters you can currently go see Little Women, 1917, Uncut Gems, Knives Out, Jumanji: The Next Level, or even Cats, and bring your friends. Also start learning about other production companies like A24. Their filmography includes Uncut Gems, Waves, The Lighthouse, The Farewell, Midsommar, The Last Black Man in San Francisco, and many more.